Alec Ramsay is devastated by the loss of his beloved horse until one day when Mr. Volence, owner of Sun Raider, shows up.

Mr. Volence is in search of new stallions to race.

Alec convinces him that Abu ben Ishak would probably have the horses he’s looking for.

Not long afterwards, Mr. Volence heads to Arabia with Alec and Henry to find the great Abu ben Ishak and the Black.

But along the way their guide is murdered by a mysterious killer.

Mr. Volence, Henry, Alec, and Raj, their interpreter, are left stranded in the great desert with no food, little water, and one camel.

Together, in one last attempt to survive they head towards the mountains.

They reach the mountains just barely in time.

There they meet a young chieftain and his men riding majestic Arabian stallions, who show them the way to Abu ben Ishak’s tribe.

Walter Farley continues to thrill readers in this amazing tale of a boy’s love and endurance to find the horse of his dreams. 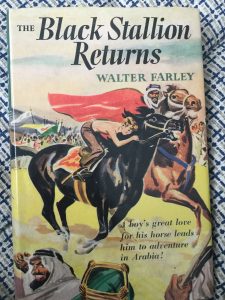 When I bought my book I just got a used copy, so my cover is different than the most recent edition.

Series: Book 2 of The Black Stallion

What to Expect: Adventure, Thrill, Excitement, Danger, Hardship and Some Violence; 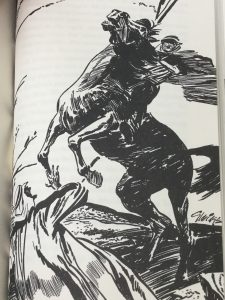 I think that the character of the day for this one is Alec.

When Abu Ja’ Kub ben Ishak takes the Black back to Arabia, Alec doesn’t give up.

Instead, he finds a way to see his beloved horse again.

Then, just after he arrived to Abu Ishak’s home to see the Black again, the Black is kidnapped.

While Abu Ishak is preparing his men for battle for the Black, Alec and Raj find out a terrible secret, which puts the Black and Alec in grave danger.

Only their friends can save them but will they get there in time?

I liked”The Black Stallion Returns” because it has lots of adventure and it also has some mystery.

One of my favorite parts is when Alec and Raj are spying on these Arabian guys and end up finding out where the Black is.

I also liked some other pretty cool things which I won’t tell so as not to spoil the book for you. 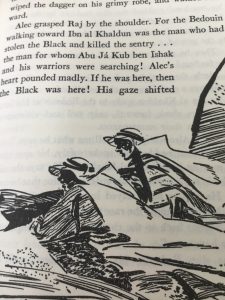 One of the things I didn’t like about”The Black Stallion Returns” is that the real excitement and adventure didn’t start until after I had reached the middle of the book.

Of course it’s not that big of a book.